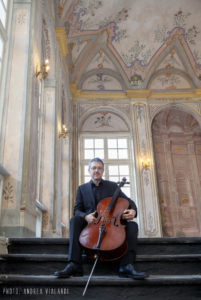 He brilliantly graduated at the Music Conservatory “N. Paganini” of Genoa in the Maestro Nevio Zanardi class. He then continued his studies with M° Flaxsmann and M° Laffranchini, the historical Principal Cello of the “Teatro alla Scala” in Milan. Still in his twenties he wins the selections for the Teatro alla Scala Youth Orchestra, the Cherubini Orchestra conducted by Maestro Riccardo Muti, the Italian Youth Orchestra and the famous Verbier Festival Orchestra (Switzerland), whose main conductor was the M° James Levine.

In 2001 he joined the prestigious “Philharmonic Arturo Toscanini” of Parma, conducted by M° Lorin Maazel, where he was chosen to play the role of Sub Principa Cello: in this team he holds concerts all over the world, from Paris to Tokyo, from Moscow to Rio de Janeiro. Worthy of particular mention in this long period of activity is the collaboration with the New York Philharmonic: the two orchestras performed jointly at the famous Avery Fisher Hall in New York.

He is the winner and eligible for auditions and competitions held at the Teatro alla Scala in Milan, the Accademia Nazionale di Santa Cecilia in Rome, the Maggio Musicale Fiorentino, the Verdi Theater in Trieste, the Teatro dell’Opera di Roma, the Orchestra of the Arena di Verona and the Mahler Orchestra. He continued his collaboration with these institutions for about twenty years.

He is regularly invited as Principal Cello at the Abruzzese Symphony Orchestra, the Rossini Symphony Orchestra of Pesaro, the Camerata Strumentale Città di Prato (role he has covered since the 1999 competition) and the Orchestra of Rome: with the latter he performed two Japan tours  as the First Solo Cello, performing in the nation’s most prestigious concert halls.

Since 2019 he has been a permanent member of the “Teatro Carlo Felice Orchestra” in Genoa as Sub Principal Cello. 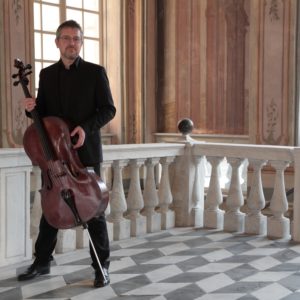 THEY SAY ABOUT ME

“Over the years I have appreciated the dedication to the instrument and the instrumental and collaborative technical skills he has got. Therefore I consider Marco an instrumentalist able to easily and successfully cover the roles that will be entrusted to him both in chamber orchestra, symphonic and lyrical, including the role of FIRST CELLO.”

“The artistic qualities place him among the best and most qualified figures in the musical field. (…) His preparation, in continuous, intelligent evolution, both in the technical and interpretative fields, has given and continues to give security to anyone who uses it as a cellist.”

“During the years of activity of the Camerata Strumentale in Prato, I had the opportunity to get to know and appreciate the beautiful musical and instrumental skills of Marco De masi, who knows how to combine uncommon solo skills, the ability to blend in with other musicians in the orchestra.”

“The undersigned Romano Pucci, first flute of Teatro alla Scala Orchestra in Milan, declares that he frequently makes use of the collaboration with the cellist Marco De Masi in various chamber ensembles in concerts in Italy and abroad and that he demonstrates commitment, punctuality and great professional seriousness.”