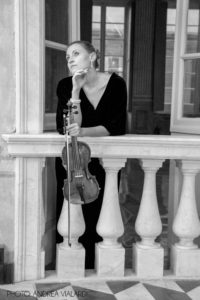 Francesca Giordanino began studying the violin at the age of 8 under the guidance of Maestro Lucio Liviabella. Later she graduated brilliantly at the “G. Verdi” Music Conservatory of Milan in the class of Giovanna Polacco, pupil of Maestro Paolo Borciani, first violin of the Italian Quartet. During the course of studies, she came into contact with important international youth orchestras, including “The Mediterranean Youth Orchestra”, the “Junge Osterreichische Philarmonie”, the “Mahler” and “L’Ecyo” Orchestra. At the age of 20 years old, she performs as soloist Prokofiev Concert n°2 in G minor, accompanied by the orchestra of the “I Pomeriggi Musicali” Foundation in the famous Verdi Hall in Milan.

As a soloist she achieves with full merit the three-year diploma of High Violinistic Improvement at the foundation “R. Romanini” of Brescia under the wise aegis of Dora Schwarzberg of which she follows summer masterclasses in Hwar (Croatia) and Goslar (Germany) and who referring to her speaks of “violin talent as an important Italian musician”. She continued her refinement under the guidance of Michael Frischenschlager at the Mozarteum in Salzburg, the Semmering Summer Academy (Vienna) and the Universität für Musik und darstellende Kunst in Vienna, thanks to the contribution of the well-known Turin musical association “De Sono” who awarded her a scholarship for her artistic merits.

In the chamber music field from a young age she matures experiences of the most disparate: as a member of the Trio Hemiolia she attends the “Chamber Music High School” of Duino with Trio di Trieste, obtains the merit diploma at the Accademia Chigiana of Siena and stands out in numerous international competitions (Kawai Prize, Thalberg Prize etc.) as well as in many concerts in various Italian locations including Fermo (Gioventù Musicale), Trieste (Politeama-Rossetti Theater), Todi (Municipal Theater), Florence and Naples.

She also came into contact with Astor Piazzolla’s music by attending a course dedicated to him with M° Hugo Aisemberg, a famous Argentine pianist who performed on several occasions with the missing composer. With Irene Aisemberg, pianist and art’s daughter, she will inaugurate a duo that will perform in many Italian cities with considerable success from the public and critics.

After being eligible for the competition, she became Concertmaster in the “Rome Symphony Orchestra” where she had the opportunity to work with conductors of the caliber of Julianhe Kovatchev, Ola Rudner, Luc Baghdassarian etc. and soloists such as Aldo Ciccolini, Shlomo Mintz, Boris Belkin and many others.

Since 2008 she has collaborated for clear fame with “The Orchestra of the National Academy of Santa Cecilia” in the role of Assistant Concertmaster (with First Chair obligation), with “Roma Sinfonietta” and “The Abruzzese Symphonic Institution” as Concertmaster. Also in 2008, she was first overall out of 130 candidates for the audition for violin in a row at the “Teatro dell’Opera di Roma” : from that moment she collaborated with the Theatre as Assistant Concertmaster with First Chair obligation.

From 2014 until now, she has played the role of Assistant Concertmaster with First Chair obligation at the “Carlo Felice Theater” in Genoa.

In 2015 she reached the final in the international competition for Concertmaster of the famous Lisbon Metropolitan Orchestra.

She is able to speak, read and write in Italian, English and French.

She is also a writer from an early age, both in the poetic and narrative genre: in 2010 she was awarded the “Carlo Azeglio Ciampi” medal for the HIGH MERIT of her poetic compositions presented at the XIX edition of the international literary and artistic prize ” Elio Vittorini” in Messina.

Several of hier photographs taken by Maestro Franco Gallo have been published on the VOGUE ITALIA website. 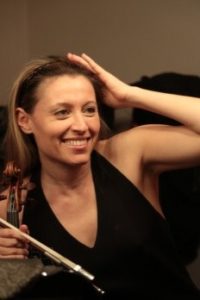 THEY SAY ABOUT ME

“All these qualities, combined with an advanced technique, beautiful sound and inner charm, constitute a true and important Italian musician.”

“In all the concerts where I had the opportunity to listen to the young Turin violinist, she demonstrated profound musicality, exceptional violin skills and convincing artist personality.”

“I have known Francesca Giordanino for many years, since she had the opportunity to collaborate with our Orchestra of the National Academy of Santa Cecilia, holding the role of Assistant Concertmaster. On such occasions, she has always shown to be very prepared both from an instrumental point of view and from the experience of delicate work in the orchestra.”

“Francesca Giordanino has challenged the disturbing and demonic nature of the composition, famous yes, but not frequently performed, as feared by the most experienced concert players. Leveraging on an often authoritative sound but cantably be sung, the young violinist conquered the audience, so much so that in different moments of the performance we thought: good, here is a well-turned phrase, here is a passage of exemplary execution. In the end, Francesca was very celebrated: no encore, since every note to the “Kreutzer” would be out of place “.

“Francesca Giordanino made a precious violin of the Maggini Foundation attributed to Giuseppe Guarneri called “del Gesù” vibrate throughout the evening and created emotions and suggestions worthy of a much more prolonged expertise than that of her twenty-six years. Turin, long blond hair, athletic physique, enchanted the audience with the classic themes of Astor Piazzolla’s repertoire.” 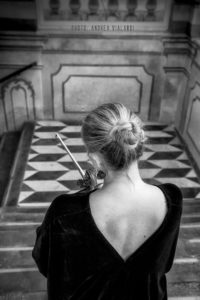 1. L.V. Beethoven: Violin Sonata in A Major. n. 9, op. 47 “Kreutzer” Concert at the Friends of Music of the Catholic University – MILAN